Global-5 Staffer Joins Fight on Frontlines of War Against Coronavirus 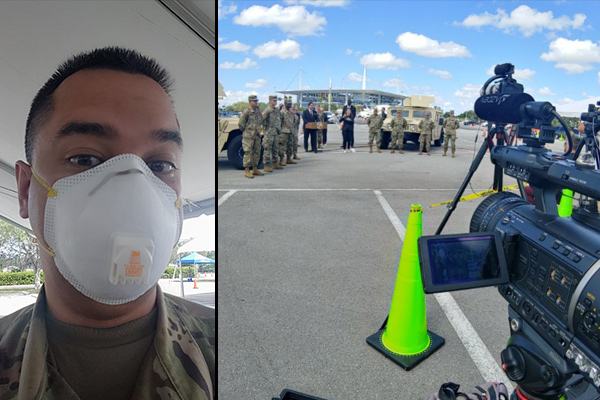 Marc Morgenstern’s life changed drastically about four weeks ago when an urgent phone call plucked him from the relative safety of everyday work and sent him into the heart of the fight against the deadly coronavirus.

A valued Global-5 employee and a former U.S. Marine combat correspondent, Morgenstern had just finished another busy workweek at the Regional Transportation Management Center (RTMC) in Sanford when he got word that his National Guard unit was on standby and he should be ready to roll at a moment’s notice.

By Saturday, March 14, Global-5’s Public Information & Community Outreach Specialist had transformed into the Florida Army National Guard’s Sergeant Morgenstern with orders to head to the Miami-Miramar-Pembroke Pines area. Upon arrival, he witnessed the men and women of the Guard starting to set up three community-based testing sites for COVID-19.

A four-year veteran of the Marine Corps with service as a combat correspondent in Afghanistan, Morgenstern knew how to deal with dangerous situations and was ready to join the effort to stave off a disease that has raged around the world, claiming thousands of lives and disrupting millions of families and businesses.

Assigned to document the work of the testing sites and make his videos available to the media and general public, he was well prepared. Still, he couldn’t help feeling a bit sad, knowing he was going to miss his daughter’s third birthday and not be there to help protect her during the outbreak.

“That was the one of the things that kept nagging at me as I packed to go,” said Morgenstern, a member of the 107th Mobile Public Affairs Detachment. “I felt awful about leaving work, too, knowing that people would have to cover for me. But I was part of a team and we had our mission. I feel so blessed and humbled that everyone at Global-5 and at the RTMC has been so supportive.” 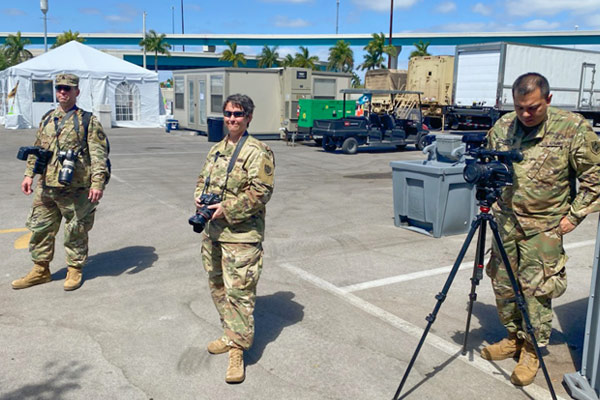 His military training kept him focused on the mission, as he set about recording the National Guard’s intense effort to build and operate testing sites handling several hundred people a day. Local agencies and volunteers pitched in where needed, and soon the Guard units were ready to collect medical samples, maintain records, distribute supplies, and keep public information flowing to the media and public. (See examples of Morgenstern’s work.)

“The 12-hour days are tiring,” he said while on a rare break near the testing sites. “But it’s really rewarding to see everyone working to try to give anxious residents a sense of calm. This is such an unprecedented event. This is history that we’re living through.” 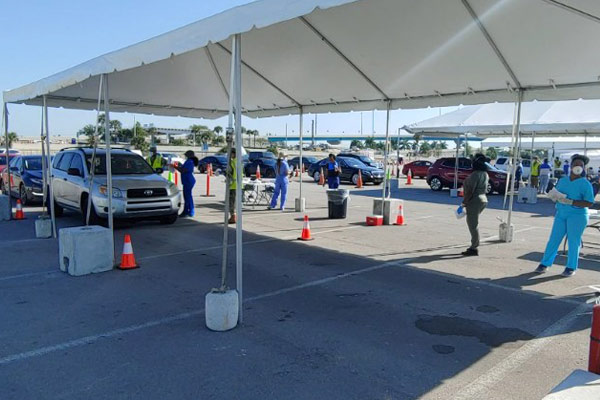 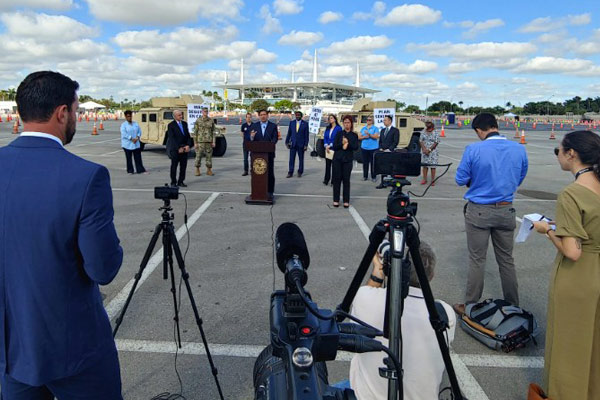 Despite long hours, the sergeant said he’s in good spirits and good health. A recent test found him to be free of the COVID-19 virus. And the local reaction has been gratifying with civilian health care workers volunteering and restaurants sending food to testing sites. That makes it easier for him to face the possibility that he might be deployed again before the medical crisis subsides.

During spare hours in South Florida, he reads, runs, and has video calls with his daughter. He’s looking forward to her belated third birthday party and to resuming his two-year career with Global-5, which includes working at the RTMC to keep traffic flowing safely and smoothly on interstates, highways, and major arterial roads.

Meanwhile, he knows he’ll look back on his service as part of an extraordinary moment.

“This is a generational turning point,” Morgenstern said. “It touches my sense of duty and I’m proud to be a part of it.”

Update: After more than 30 days of active duty, Marc Morgenstern is back at work for Global-5, looking forward to more normal times when he can celebrate his daughter’s birthday, and waiting to hear if he’ll be called back to service.